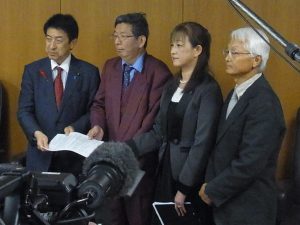 【Objective】
To create a society where people with dementia continue to live well with hope and dignity after diagnosis.

【Activities】
1. Collect members’opinions and submit proposals to Ministry of Health, Labour and Welfare (MHLW)
Outcome: The New Orange Plan made clear “to respect the will of the persons with dementia” and “to focus on the perspective of the persons with dementia.” A government plan was laid out to promote participation of people with dementia in local government policy planning and evaluation. (Jan 2015)
2. Cooperating with local governments, media, academic conferences, and service providers, engage in disseminating the voices of people with dementia all over Japan, through lectures, presentations, TVs, newspapers and magazines
3. Collect members’ opinions on important current social issues to deliver to media and MHLW.
e.g. the Supreme court decision on railroad accident.
4. Serve as a committee member in various projects of MHLW and local government
5. Organize national meeting (Tokyo, Tottori)
6. Organize monthly small meeting
7. Participate in preparation for ADI2017 Kyoto as persons with dementia
8. Send out JDWG news e-mail letter as need basis